A Punta Gorda Sunday: Part I

Many RVers (and non-RVers!) like to spend winters in Florida. Punta Gorda is a small town on the Gulf Coast, just north of Fort Meyers and about two hours south of Tampa.

Punta Gorda means "Fat Point," which I guess refers to the fact that it sits at the mouth of the Peace River where it forms Charlotte Harbor, and the land must come to a Fat Point there!

Since it is on the harbor, Punta Gorda is not so much a beach town as it is a fishing and boating town. What we like about it is that it really IS a small town, with a real town center (not like so many towns where the Town Center is actually a shopping mall!).

Downtown shops are all small locally-owned businesses - galleries, gift stores and restaurants. It has some charm, which many Florida towns and cities lack.

Our Punta Gorda Sunday consisted of first going out to breakfast at a diner at Muscle Car City. We had spotted it a while ago but only just finally got around to checking out. The rest of our day was spent at Ponce de Leon Park, which will be our Punta Gorda Sunday Part II post that I'll put up later this week.

Muscle Car City is located on Route 41 in Punta Gorda. It's a giant warehouse space that holds the diner, an antique car museum and a store that sells t-shirts, gifts, auto supplies and even some fabulous vintage cars that are for sale.

Here are some shots of RVPainter doing his best Muscle Man poses outside Muscle Car City: 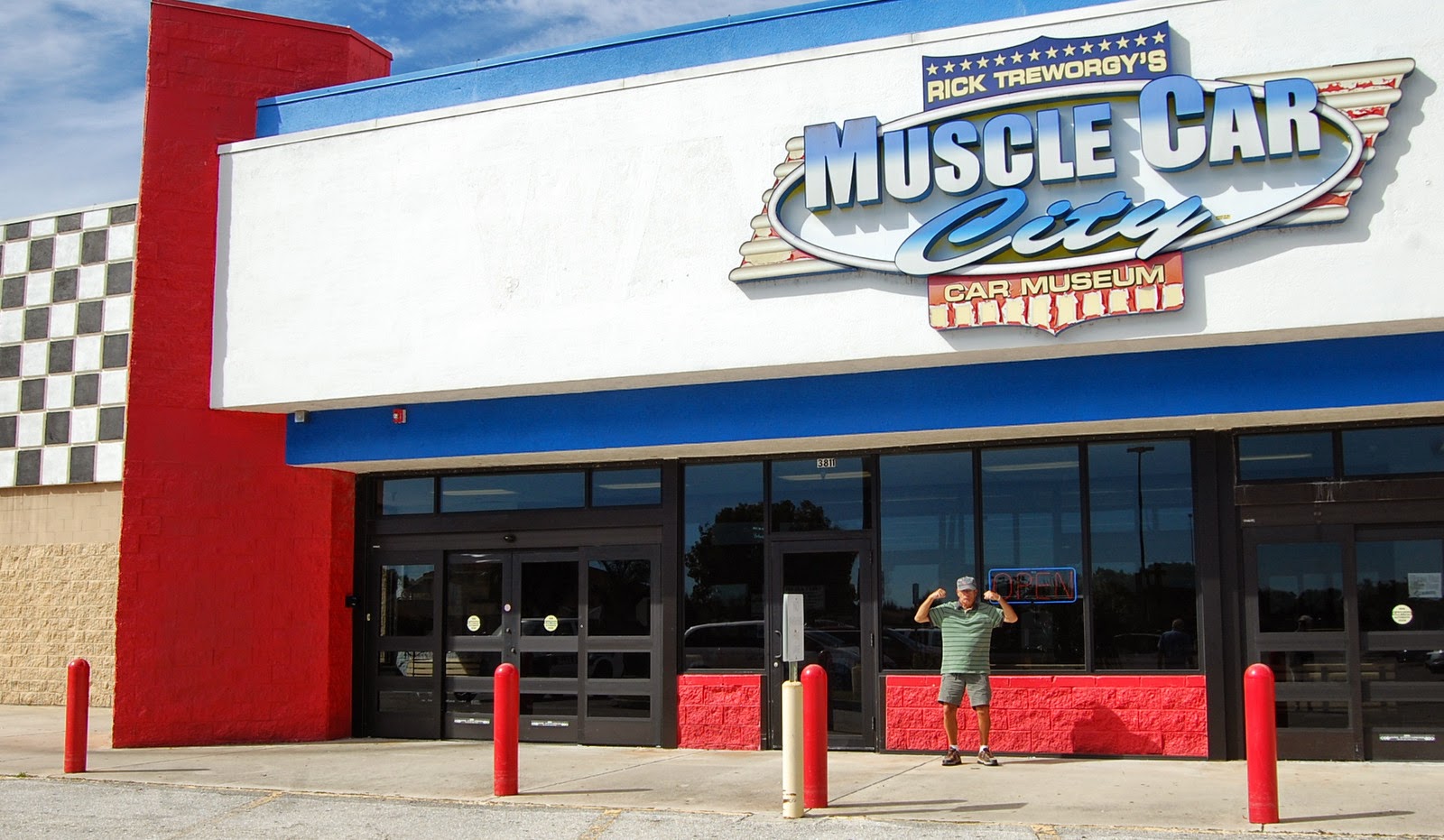 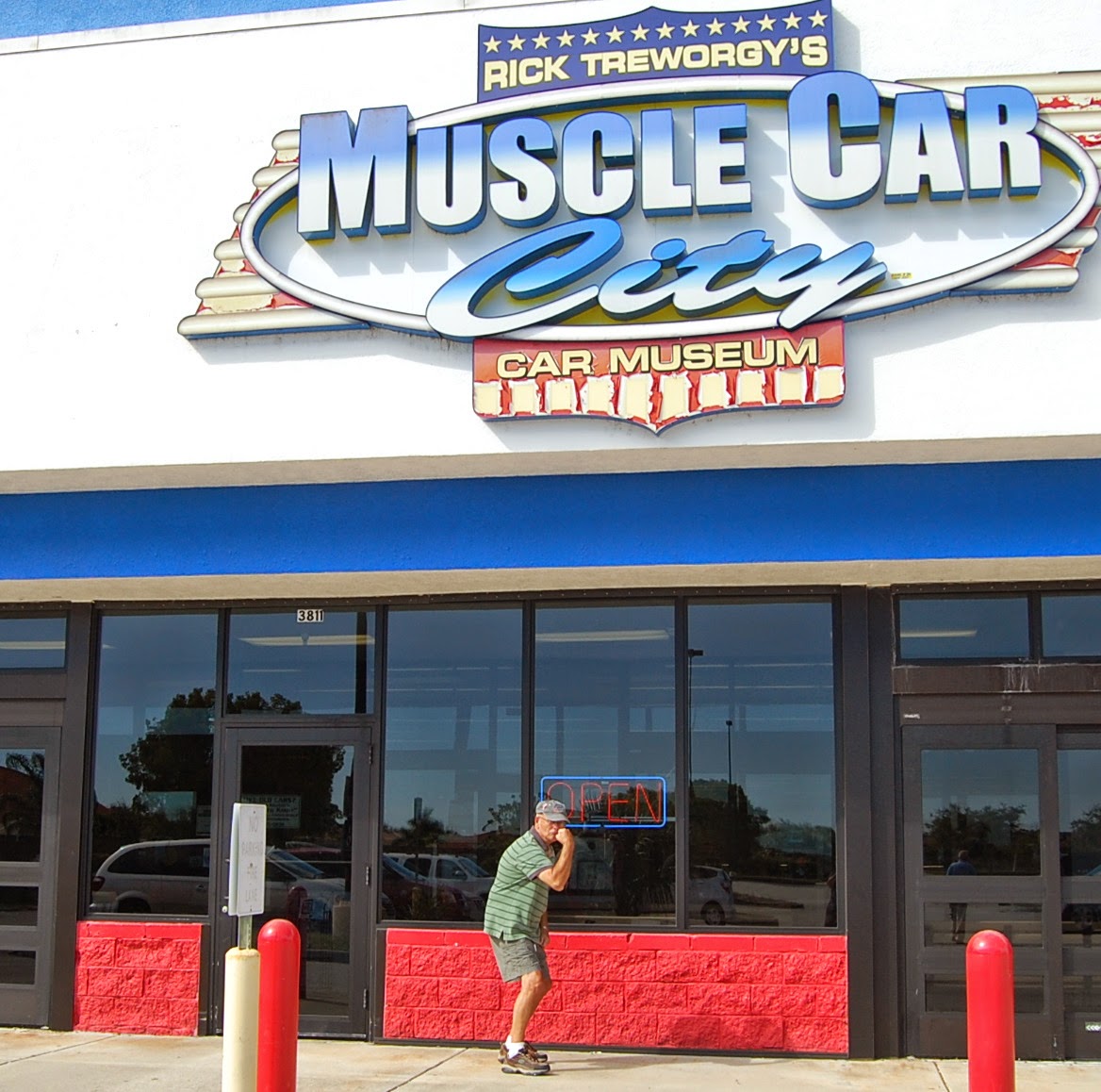 Muscle Car City is a 99,000 square foot museum with well over 200 vintage 1950’s to early 1970’s muscle cars. It boasts classic cars and hot rods spanning 35 years of makes and models. There are GM Performance Cars, Camaros, Chevelees, El Caminos, Big Block Impalas, Pontiac GTOs, Oldsmobiles 442s and a huge assortment of Hot Rods and Antique Chevys. The owner, Rick Treworgy, has managed to maintain and collect one or more Corvettes of each year from 1954 to 1975 and several of each series from 1975 to 2006. It's a vintage car lovers dream!

There are often car shows in the parking lot and lots of events, which you can check out at the website:
Muscle Car City Website

We went for breakfast at the diner, because, well, because we love diners! It was good diner fare - I had scrambled eggs with bacon, breakfast potatoes and toast for $4.95 and RVPainter had pancakes with sausage for a similar price. We liked it enough to want to go back and try them for lunch.

Here is a shot of the diner: 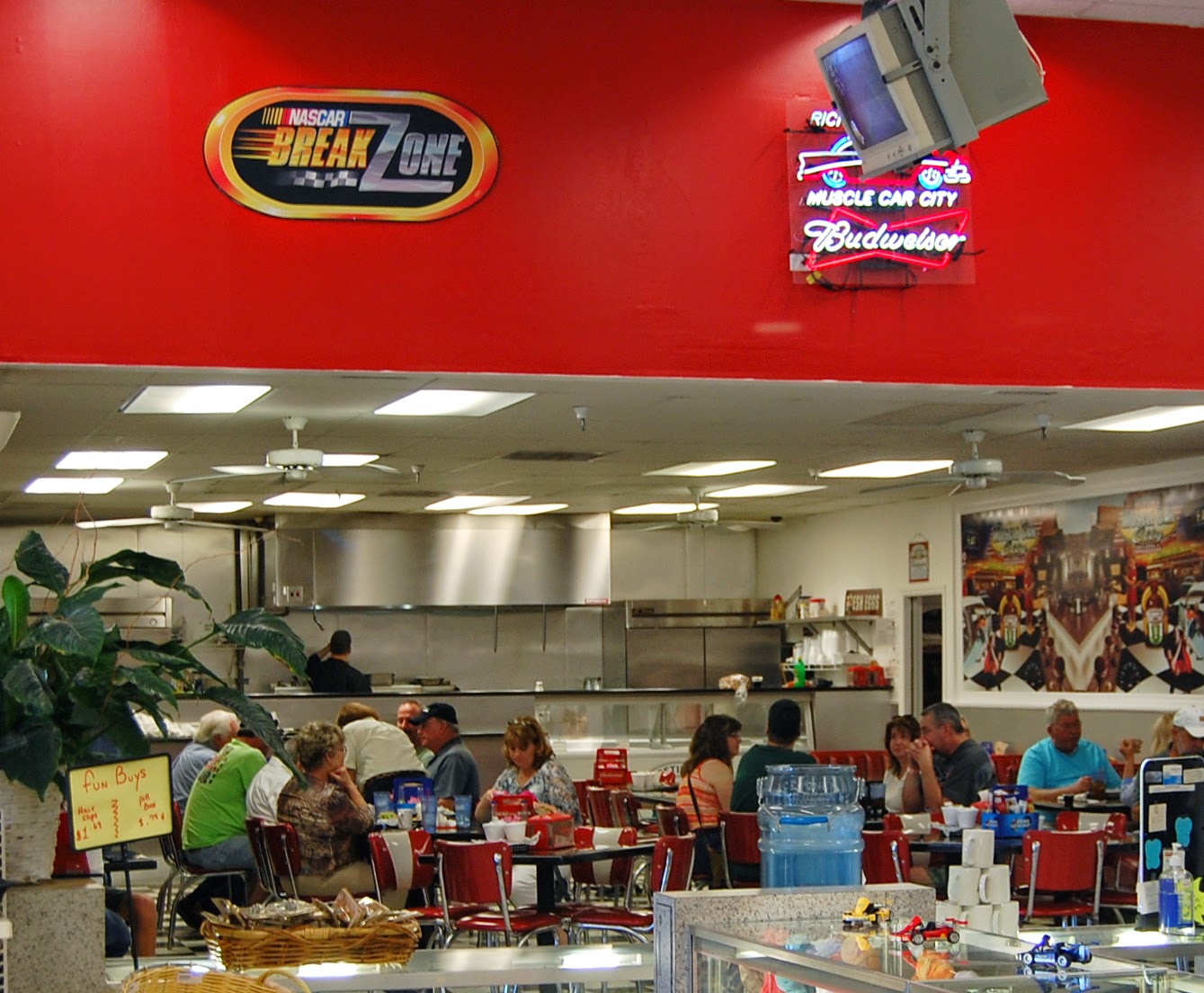 And here are some shots around the store, including some of the incredibly beautiful vintage cars for sale: 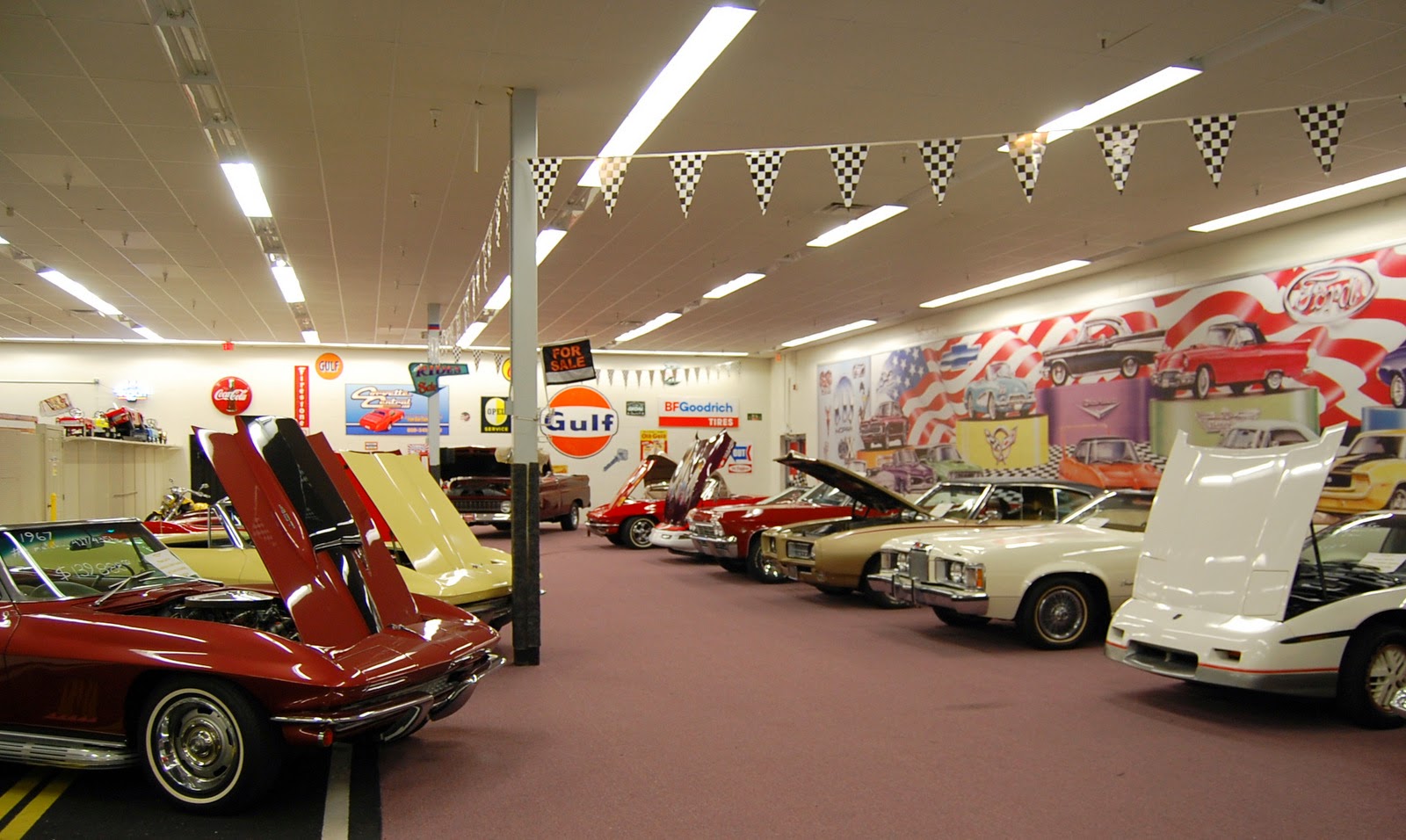 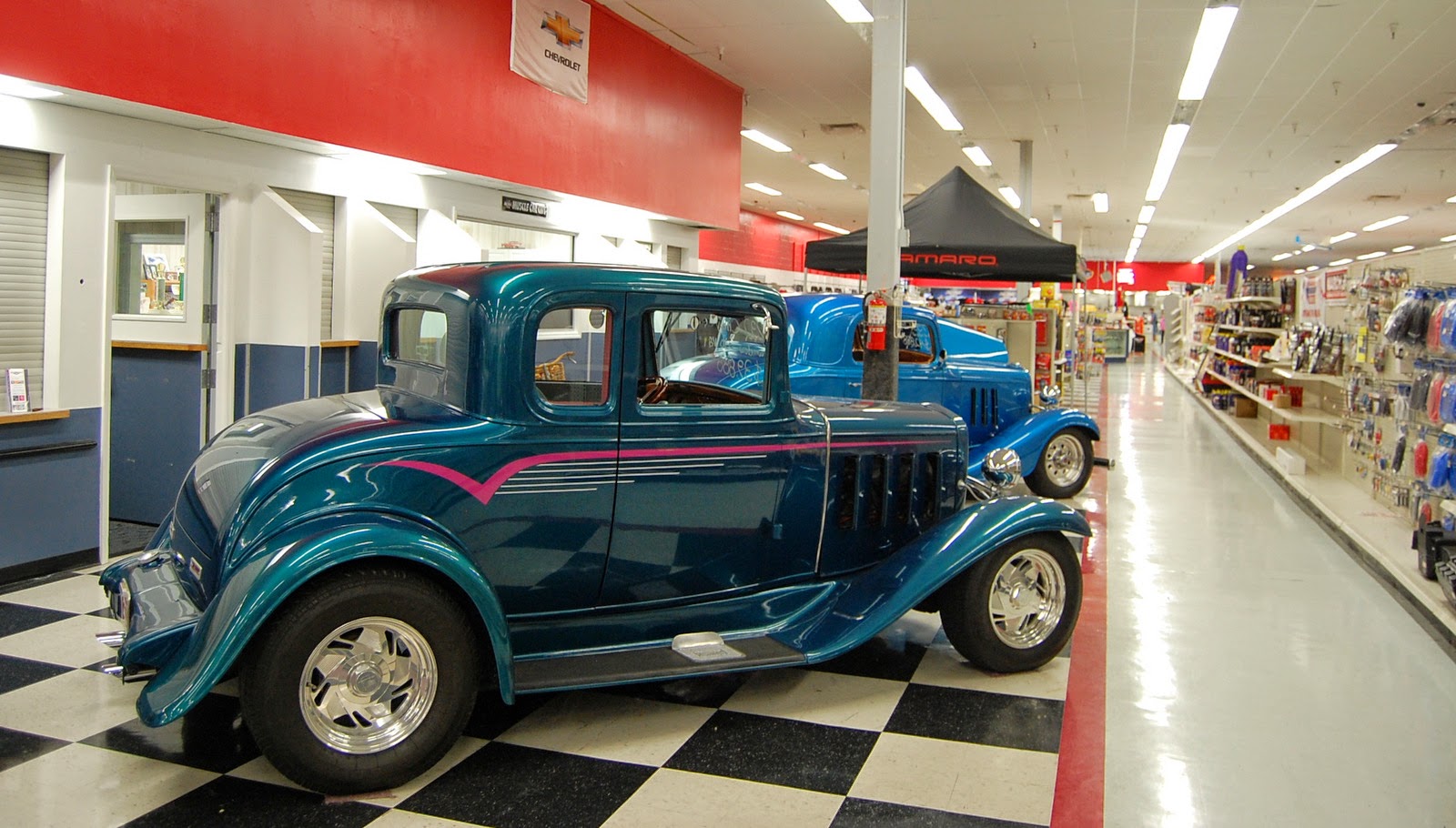 Come back later in the week for Punta Gorda Sunday Part II, when we'll show you Ponce de Leon Park, where we spend a peaceful and relaxing afternoon watching boats come.

Posted by Melissa Ann Goodwin at 6:38 AM