We lived in Arizona for seven years and made many trips to Sedona during that time. But we hadn't been there in about 10 years, so we were VERY EXCITED to return there recently. Sedona is about two hours north of Phoenix/Scottsdale, up I-17. It's a beautiful drive that takes you first through Sonoran desert landscape with saguaros and prickly pear, then as you climb in elevation, through the high desert landscape dotted with juniper. You can come into Sedona either on 89A (having taken the Cottonwood exit) or on Rt. 179. We like to come in via 179 so that this becomes our first real view of those amazing red rocks: 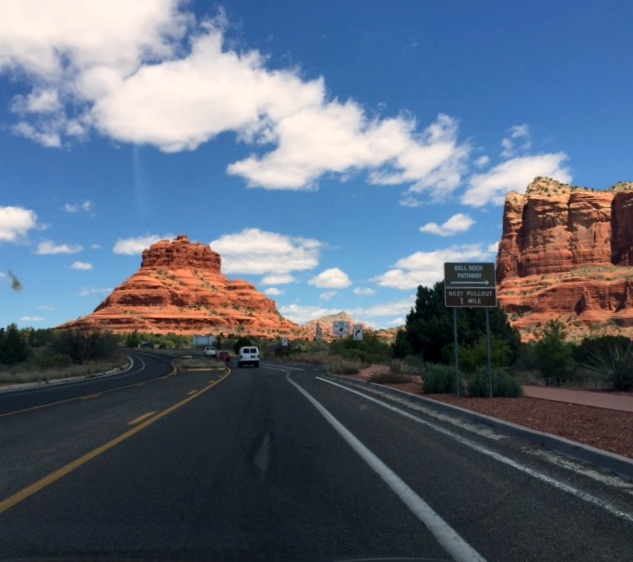 Sedona is an incredible place with amazing vistas of red rocks everywhere you look. The first time we came, we couldn't stop saying, "WOW," and that hasn't changed! There's so much to see and do here that I think it's better to just let the pictures do the talking for us:

Our first stop on arrival was Tlaqueplaque because it was too early to check into our hotel, we were hungry and we just love this place! Tlaqueplaque is a lovely, rambling place filled with galleries, shops, courtyards and a couple of restaurants. It looks like an old Spanish mission. 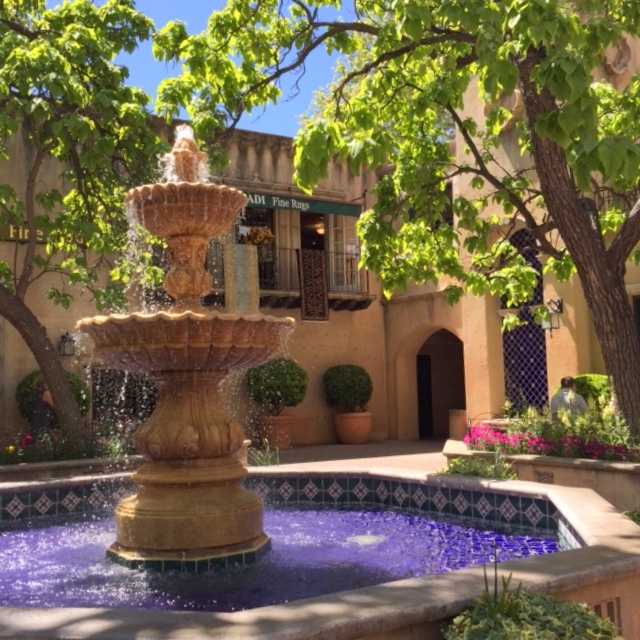 On our way to Sedona, we stopped at one of our favorite old haunts, Rock Springs Cafe. It's less than 20 miles north of Phoenix and they are known for their PIE. I saved mine to eat when we got to Tlaqueplaque. That's the lemon merengue, FYI. 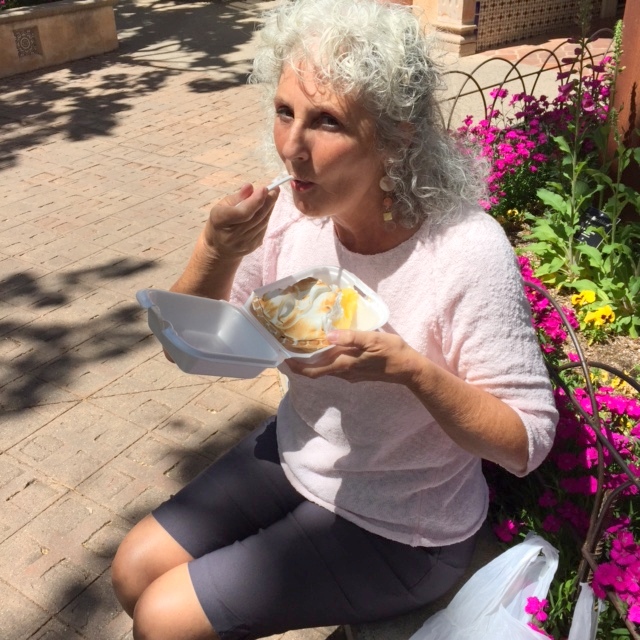 A Mariachi Band playing outside El Rincon, a Mexican restaurant at Tlaqueplaque. It's good, and the location and atmosphere are nice. 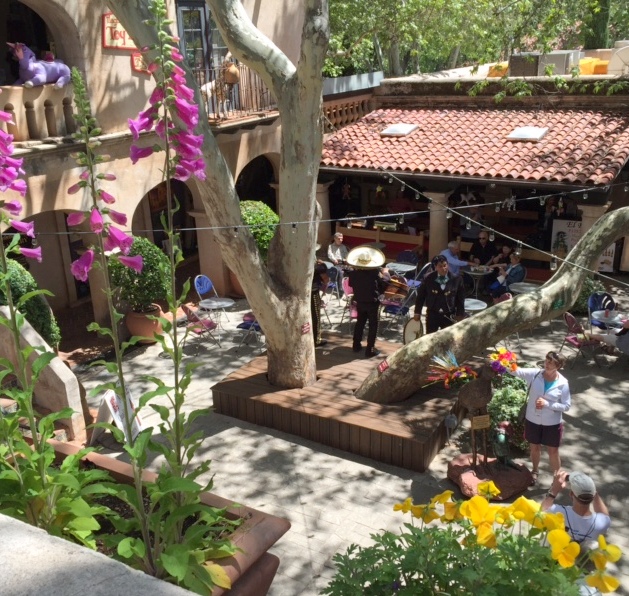 We stayed at Sky Ranch Lodge, which is up by the small Sedona airport. People gather close to the top of the hill every evening to watch the sunset. The hotel is cozy/rustic - comfortable without being fancy. The grounds are just lovely - they've really created beautiful outdoor spaces so when you return to your hotel at the end of the day you aren't just stuck in your room - you can sit outside in any number of sweet spaces they've created.

This is a koi pond in the garden outside our room at Sky Ranch. 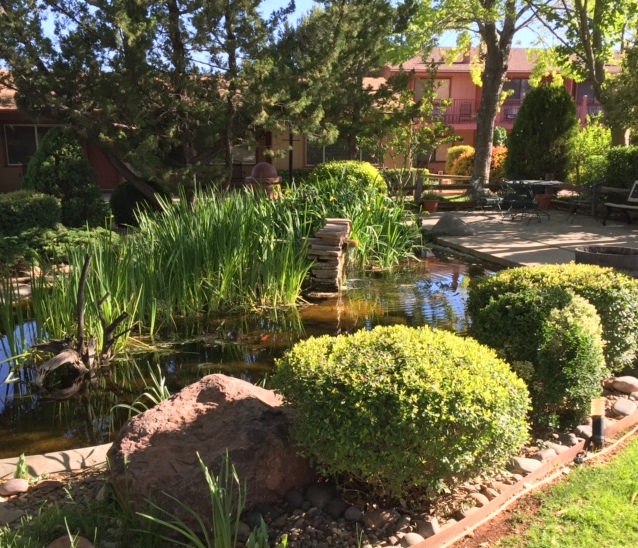 Okay, off to hike Bell Rock Trail. This is an easy hike on a wide, fairly flat trail. It takes you right beside and around Bell Rock. 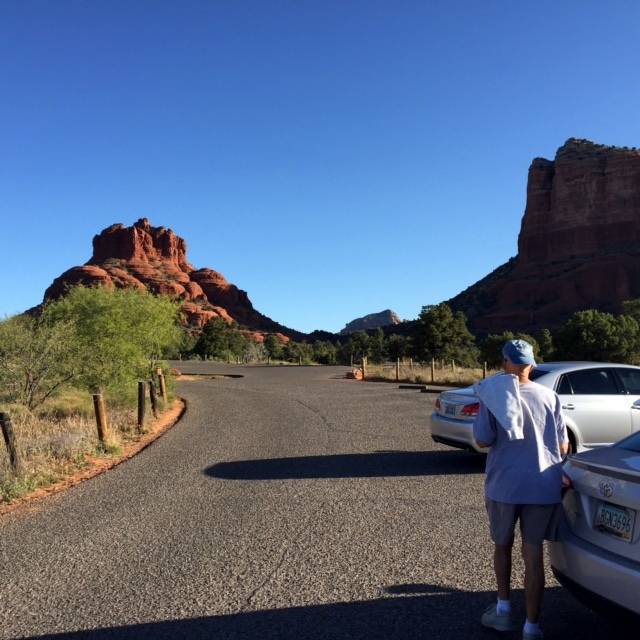 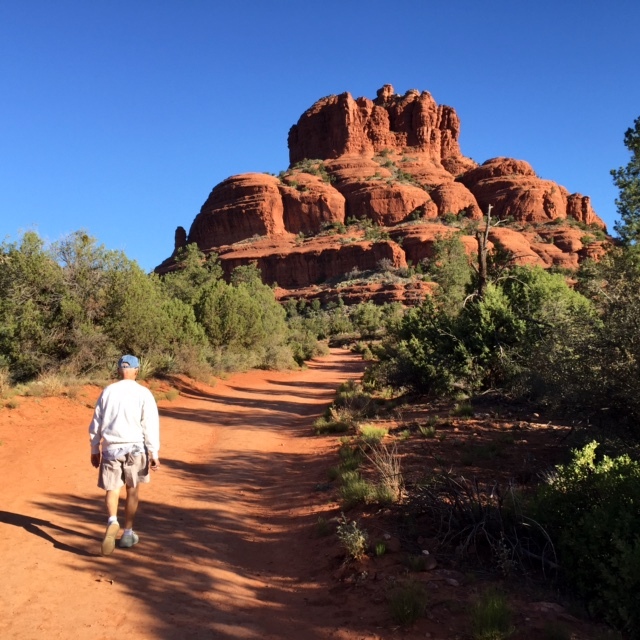 The red rocks of Sedona are known for being vortexes of energy. Here Dick is touching the base of Bell Rock to tap into that energy. He calls it "vortexting." :) 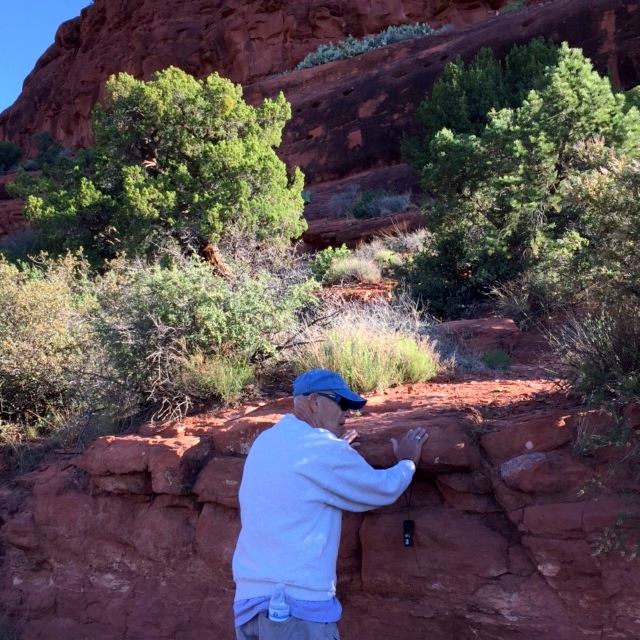 Another favorite thing to do is drive up Oak Creek Canyon to Vista Point. It's a gorgeous overlook where people of the Navajo Nation set up to sell jewelry and pottery. From here it's a hop, skip and jump to Flagstaff if you want to keep going.

I couldn't resist doing Half Moon Pose at Vista Point: 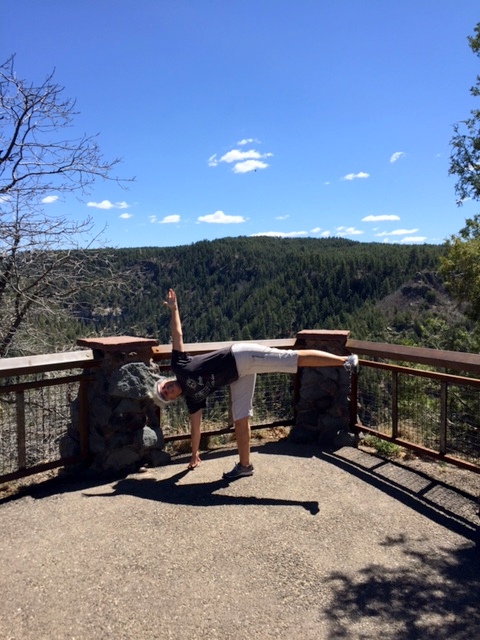 Many beautiful things for sale, directly from the Navajo. 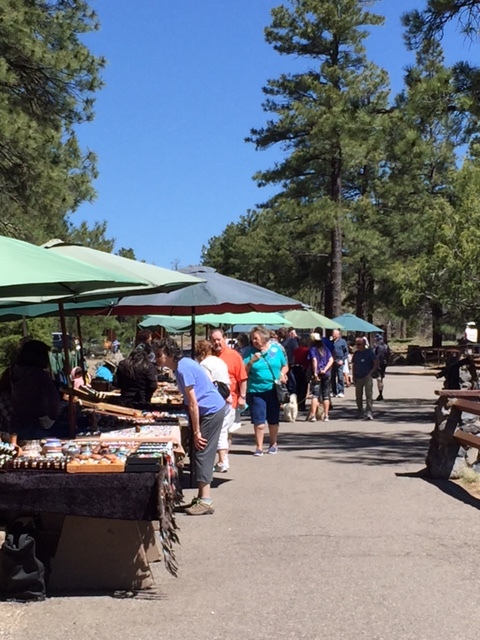 Back in town, out on 89A - one of our favorite stores for gifts, furniture and home decor with a Spanish Flair: Mexidona. 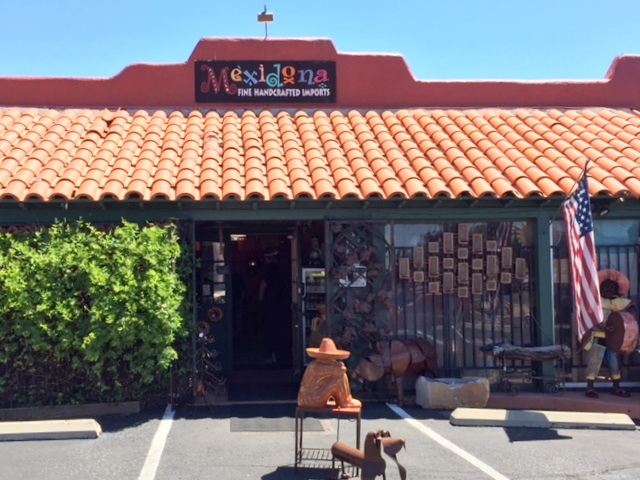 Okay, now we've headed out to Red Rock Crossing State Park - a short drive up 89A. This is what is called the "back side" of Cathedral Rock. That's Oak Creek, and right about here there used to be rocks and boards so you could cross over - hence the name Red Rock Crossing. But they're gone and I'm not sure why, so you kinda have to call it Red Rock Crossing No More. Of course you could wade across, but that would be tricky if you've got your camera and other stuff....

Doesn't matter  - this is still one of the most beautiful places on Planet Earth. 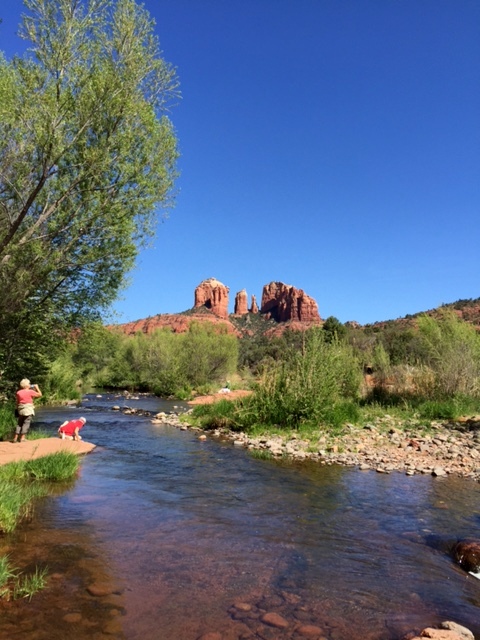 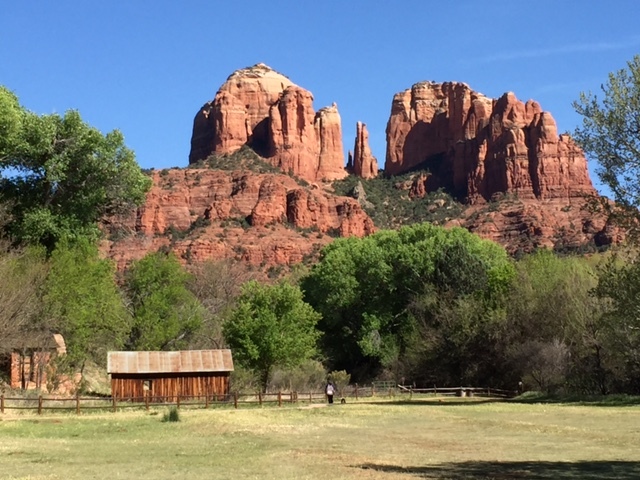 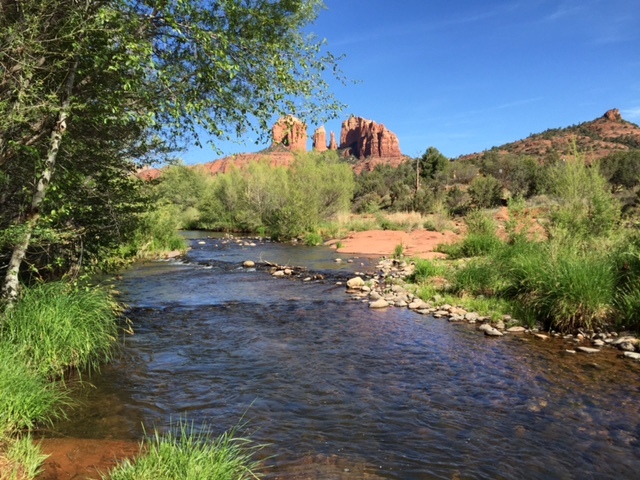 All right, let's eat! At the Sedona Airport right by where we stayed, there is a great restaurant called the Mesa Grill. It's fun to watch the small planes come and go, there are great views of the red rocks, and the food was AWESOME. Highly recommend!!! 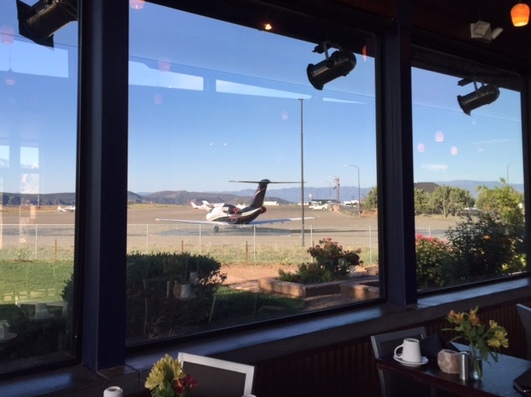 Dick can't quite believe his eyes. He's been on a diet so he's very happy to see this food! I got an omelet that had cheese, chorizo and marmelade - I know, that sounds weird, right???? It was SO GOOD. 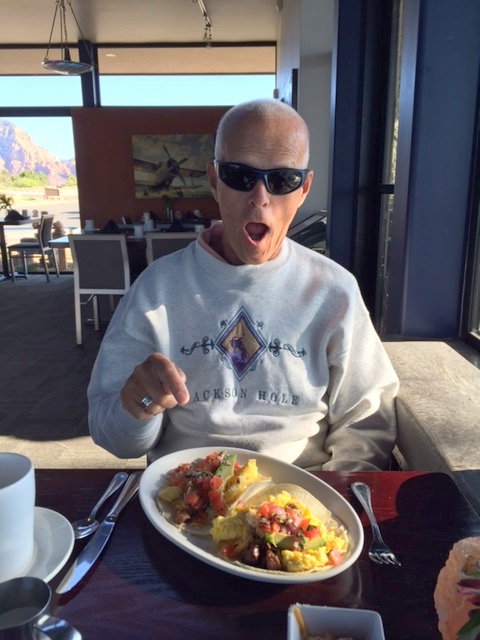 Now we're up at the Chapel of the Holy Cross - another of our favorite places. It was designed to blend into the landscape and it's a very spiritual place. There are amazing views from here too:

Courthouse Rock and Bell Rock in the distance as seen from the Chapel. 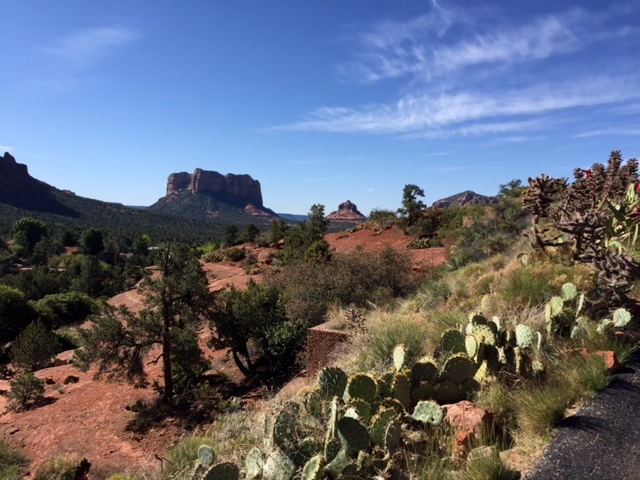 What you'd call the "front side" of Cathedral Rock, seen from the chapel. 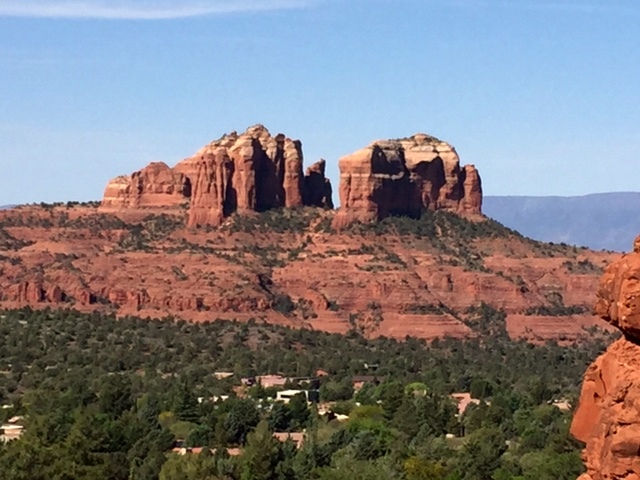 Coming up the path to the chapel. 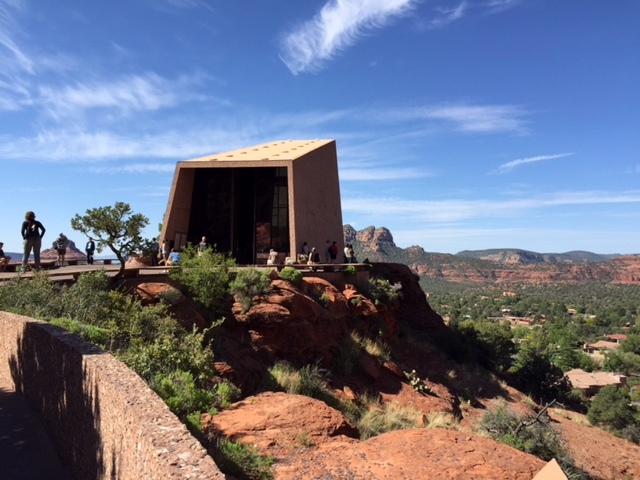 Inside the chapel, looking out. I love how they created it so you look through the cross to the landscape beyond. 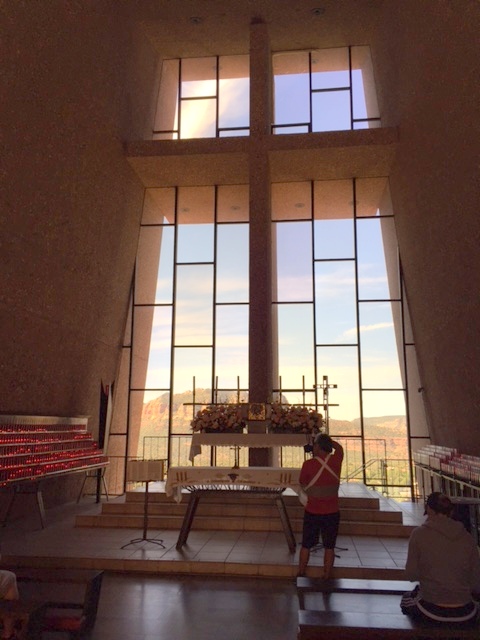 Okay, that's me with Cathedral Rock behind me. 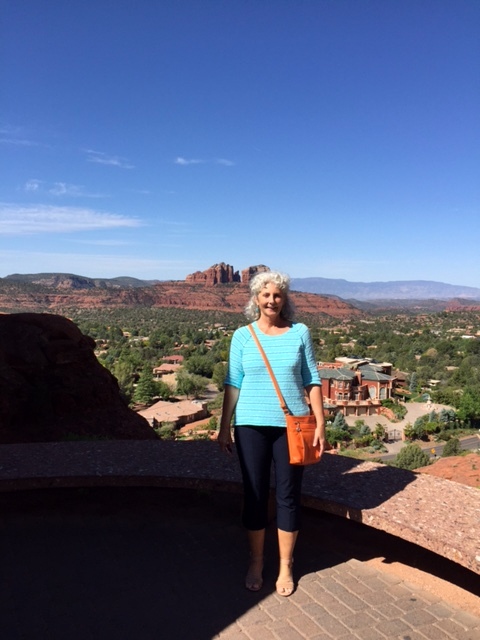 And the chapel, seen from below. 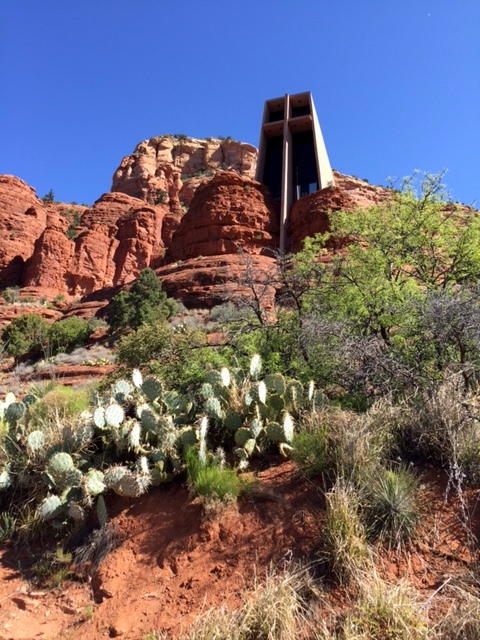 In the center of town you look up and see Snoopy Rock - the lower formation on the right. See, he's lying down, feet pointed up on the right, nose on the left, with Woodstock sitting on his nose. On the higher rock, just about center, you see a small formation jutting up that is Lucy Rock - it looks just like her! 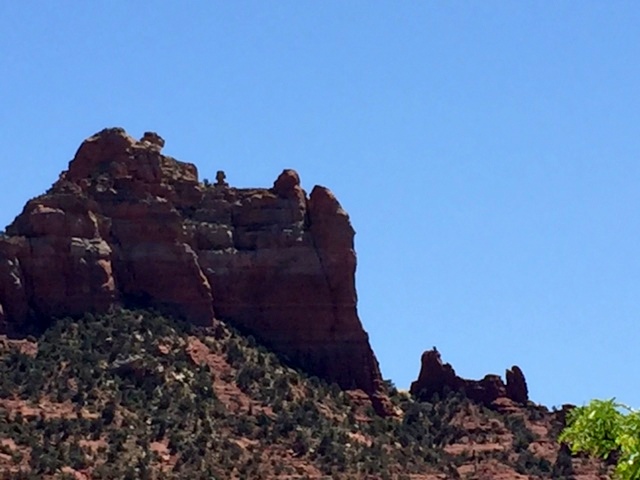 And finishing up with a drive out toward Coffee Pot Rock. 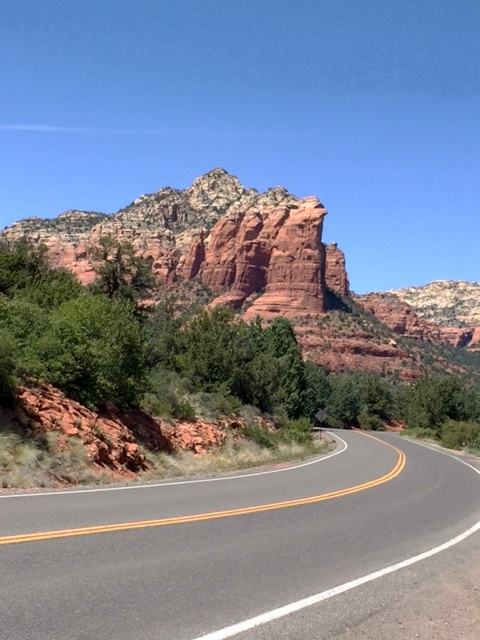 There's so much more, we could go on all day. But you get the idea! If you haven't been, GO! It's easy to get around and so incredibly beautiful.
Posted by Melissa Ann Goodwin at 10:22 AM